Listen to "Real Lithuanian" on Spreaker.

YOU CAN TRANSLATE EVERY TEXT TO ANY LANGUAGE! JUST CHOOSE ONE BELOW. 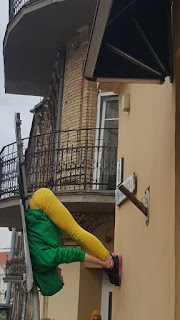 It's confusing but it can be done

Let me try to make this confusing topic a little bit clearer by comparing the so called prefixes to their equivalent in English. A big headache for many who study English as their second language is ‘phrasal verbs’. The way these are usually made is by connecting two or more words together (a verb and a particle). As a result we get a phrase, thus the name. There are so many phrasal verbs and they all look so very similar. Some examples of phrasal verbs can be: wake up, sit down, bring up, let down, show up, or get down. There are quite a few of them! And here we are using only ‘up’ and ‘down’ particles. What if we threw ‘over’, ‘in’, ‘out’, ‘away’, ‘off’, or ‘on’ into the mix? The number of combinations would increase considerably.


So naturally an English learner can feel confused, frustrated, and sometimes hopeless when they are ‘up against’ this endless mass of tiny words that do not make much sense when translated individually.

To make matters worse, to a foreign language learner’s ear, all of these sound the same. For example, ‘to put something off’ in the sense of postponement might as well be written as ‘to put something on / out / away’ for someone who only just started learning English. It does not make much visual difference and the meaning often does not look obvious.

And yet through the power of association, somehow everything eventually starts to fall into place. Gradually we realize that there is a system after all. Maybe not the most perfect system, but some kind of logical or semi-logical connection nevertheless. We start to notice that sometimes these phrasal verb expressions carry a literal meaning whereas at other times, their definition is rather abstract! For instance, we can compare two meanings of ‘got on’ and ‘get on’ in the following sentences:

Matthew got on the bus (entered the bus).
Jessica and Matthew do not get on well (they don’t like each other!).

I stepped in some dirt on my way to school (my shoes are dirty now).
I was arguing with my brother until our dad stepped in (intervened).


Clearly, phrasal verbs can have both literal and metaphorical meanings, and often if you add a particle which does not denote any direction, there will be a meaning which distances itself from the original by far. For example:

To put
To put down
To put away
To put on


These meanings of the verb can be worked out without any dictionary assistance to most English learners as they show direction or location (down, away, on).

In the following examples, the meanings are not literal, therefore a dictionary will be required and the meaning changes dramatically as compared to the original verb:

To put through
To put up with
To put off


But how does the Lithuanian language compare? For starters, there are no phrasal verbs in Lithuanian so perhaps we cannot even compare this aspect of verbs side by side with English?

Actually we can, because verbs are also used in a similar way in Lithuanian; but, there are two major differences:

Instead of a phrase, we have one word (i.e. to pick = kelti / to pick up = pakelti)
Instead of adding the participle at the end of a phrase, it is attached to the beginning of a word as a prefix (i.e. take – imti / take over – perimti).


So even though it differs in form, the concept is the same. We add a prefix and change the meaning that way. Here is an example of how it works:

Duoti – to give
Atiduoti – to give away for good (as in “please give me your old computer / I want to be the new owner of it” - “Prašau atiduok man savo seną kompiuterį”)
Paduoti – to pass a favor (as in “can you pass me the salt, please?“ - “Ar gali man paduoti salotas?“)
Perduoti – to hand over (as in “the police handed over the suspect to jail” - “Policija perdavė įtariamajį į kalėjimą”)
Parduoti – to sell (as in “I want to sell my car“ - “Aš noriu parduoti savo mašiną”)
Išparduoti – to put in the sale (as in “we will sell everything at half price only for September“ - “mes išparduosime viską už pusę kainos tik Rugsėjį”)
Suduoti – to hit / to punch (“he punched his friend in the face for no reason” - “Jis sudavė savo draugui per veidą be jokios priežasties”)
Išduoti – to betray (“I worry that they might betray us to the enemy” - “Aš bijau, kad jie gali mus išduoti priešams”)


We can see that the meaning changes in a similar way for Lithuanian compared to English. The last meaning of ‘suduoti’ does not carry the initial sense of ‘duoti’. It needs to be understood metaphorically.

Phrasal verbs or ‘prefix’ in Lithuanian is a very important part of the language, as it is used the most frequently. When we speak our native language, we tend to use these constructions the most because they feel the most natural in our own minds. Every time we need to choose between a phrasal (‘simple’) construction and an international word (‘formal/complex structure’) in our everyday speech, we will most likely choose ‘our own’ word. For example: to ‘give away’ instead of ‘contribute’; or to ‘chat up’ instead of ‘converse’; or to ‘break down’ instead of ‘not work properly’, etc. It is the same for Lithuanian: papirkti instead of duoti kyšį (to bribe somebody); and įtekti instead of duoti į rankas (to hand in something), etc.